Summer 2011 an old school friend and his three daughters visited BC for a sailing and cottage holiday, on Lake Mälar´s archipelago. It wasn’t long until around the garden barbeque the discussion turned to aircraft. As soon as PW mentioned the SSDR class of aircraft, there was no resisting the challenge to create an SSDR proposal.

We both agreed a self launching sailplane offered the best design opportunity, given the weight demands restricting engine size / available thrust, and secondly the very large wing area the regulation craved. BC dusted off a “beermat” plane concept from 2003.

After an intensive year of CAD evenings the concept was presented to PW who was not at all convinced! - ”too many engineering challenges”. The aircraft architecture, the landing gear, the propulsion, the transmission, the empennage, polymorphic wings, the new manufacturing construction - it was all too much to bring to fruition in his opinion.

BC was naturally disappointed and shelved the project for six months.

With a little break and time for reflection, BC still felt the concept had real merit despite the enormous practical challenges it presents. It also seemed that wherever you looked in aircraft design, there were inspirational breakthrough designs being touted for private, passenger and military aircraft.

So the task switched to finding people who want to be involved in a groundbreaking aircraft project - such people must exist - but how to connect with them? Hence this website, various promotions, press releases, stand at the 2013 NEC Flying Show and private reveal at Duxford. Even PW is now back on board the continually improving concept.

The project has established the DreamTeam, @20 people with the skills to build this dream. 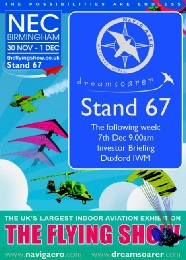 In any scenario, the project will continue unabated, either self funded, support funded or with an investment partner. The latter two options accelerate development considerably.

The further the project moves forward, the easier it will be to option investment - conversely the earlier an investor comes on board the greater percentage ownership on their outlay.

SSDR rules are changing radically in Spring - this bins much of the previous design work which is an expensive change business wise. However this means the dreamsoarer is now an aircraft that qualifies as SSDR, rather than an aircraft built specifically for SSDR - by the end of Summer the new design should be completed.

Transport and product design engineer who has lived and worked in seven European countries over 20+ years experience and a lifelong interest in aircraft design and ornithology. More here.

As BC is based in Västerås (Sweden) and fluent in Swedish, the project was originally planned to begin in this old centre of Sweden’s cold war air defence. However, a change of personal circumstances means a base anywhere in the world now possible.

UK or Scandinavia preferred, but, who knows? The world is our oyster, let’s see who is interested to be our partner(s) and keep an open mind.